Why You Should NEVER Use Merchant Cash Advances

A merchant cash advance is a form of financing that should be avoided like the plague. Over the years, we've seen a number of victims. Don't be one of them. 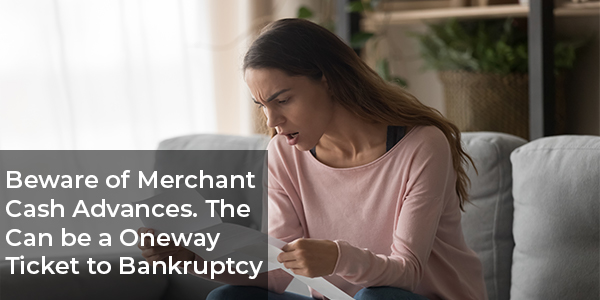 Merchant Cash Advances are NOT loans

When they reach out to you and position their products, they sound like loans. They look like loans. But, these are NOT loans.

In the aftermath of the financial crisis, banks were cutting back on lending just when small businesses needed cash the most. Companies such as Yellowstone stepped in. They got around lending regulations by calling what they did “merchant cash advances,” not loans

Even judges will admit there is very little distinction between the two, but unfortunately, there are very big differences in the consequences.

They know all the selling tricks in the books

They hire anyone who can sell, and scruples of those agents are highly questionable.

The best brokers earned tens of thousands of dollars a month, former employees say; others slept at the office, fought, sold loose cigarettes, and stole from each other.

The most notorious tactic is the bait & switch. It typically starts with an unsolicited fax or e-mail offering a large loan at a low rate. Once you respond, they generally say that in order to qualify for the bigger loan, you have to accept a smaller amount and make a few payments as a trial. Then, the hammer falls.  For example, Bloomberg reports on one poor couple.

The advance turned out to be for $36,762, repaid in $800 daily debits from their bank account starting the day after they got the money. This would continue for about three months until they’d repaid $59,960. But when he followed up the next month to inquire about the status of the bigger loan, he got no response.

Yes, that number is true. It’s usury at its worst. Because they are merchant cash advances, the percentage rate in the forms they send you are NOT the APRs. For example, one of our clients reached out to us after getting themselves into trouble with Yellowstone Capital.  According to Bloomberg, they are one of the worst.

In the Bloomberg example for instance, the APR for that loan was 350%. In comparison, our clients got off easy although it nearly bankrupted them.

The most damaging way they can affect you is through an obscure law called confessions of judgments.  To obtain funds from these merchant cash advance lenders, you usually sign a clause agreeing to a confession of judgments. This is a way for creditors to collect a debt without the fuss of a trial. It’s obscene, but absolutely legal.

Within a few days, after a judgment is made, your bank accounts can be drained. Liens will be put on any of your accounts receivables. Liens can also be put on your personal assets if you signed any personal guarantees for the advance. While not enforceable in all states, it is a well-used tactic in New York State, where these laws are enforceable. Because of this, most of these lenders are based in New York. And, if you read the contract in detail, you will undoubtedly find that the contract states that it will be governed by the laws of New York State.

We once had client who got tangled up with merchant cash advance vendors. It was a mess to unravel. In the end, the business took such a blow that it never really recovered.

Amir was an entrepreneur from birth. He was an idea machine. The downside of have such great ideas is that you have to put the effort into making them a sustainable reality before moving to the next.  Most entrepreneurs suffer from these to some degree.

Amir was off the charts. He would ideas up and running, but never quite got them to a sustainable place, which means he was always operating inefficiently. This created a real problem because he burned through his cash faster than expected.  He made some poor choices in the support he hired, and they didn’t raise the alarms until he was almost out of cash. Out of desperation, he turned to merchant cash advance vendors. Never do it, at this point! He made payroll, but they drained him dry. The payment schedule was daily, which was  faster than he could convert sales into cash.  Then, every that could happen, did.

Luckily, he came to us. We were able to set him up with the debt consolidation agency. They renegotiated the contracts with the merchant cash advance vendors, which put him on a fixed payment schedule that matched his cash flows. We reduced his payment terms with his customers, and fixed the major issues he had with price and operations. The business was saved, but the price was steep.

Why isn’t anything being done to stop merchant cash advances?

There is action in Congress, but the government process is slow. Plus, it faces an uncertain future in the Trump administration.

Velazquez, chairwoman of the committee [House Small Business Committee], and Roger Marshall, a Republican from Kansas, have introduced a bill that would ban confessions of judgment in business loans. Ohio Democrat Sherrod Brown and Florida Republican Marco Rubio have made a similar proposal in the Senate.

How do you know before trouble hits?

There are two concepts that I’d like to share that can help. They are liquidity and solvency. Both are basic finance concepts that deal with the ability to pay your bills or cover your debts.

Liquidity deals with how fast you can turn assets into cash, ideally without losing value. But, for businesses that have hit this point, losing value is generally a given.

Solvency is a longer-term metric, which looks at how much net income you are generating, and if it will cover your debts over a projected period of time, typically six to twelve months.

Merchant cash advance vendors are like sharks. They can smell the blood in the water from a mile away. If you are bleeding cash, these two concepts and the financial ratios associated with them can help you stop the bleeding before it’s fatal.

There are several accounting ratios you can use to avoid needed to run to a merchant cash advance lender. The three I like are the quick ratio, the days of sales outstanding, and the income-to-debt ratio. The quick ratio is a measure of the immediate future. Days of sales outstanding measures how many days of average sales are tied up in invoices due to you. Finally, the income-to-debt ratio is a measure of how much risk you have of defaulting.

If you monitor all the 3 of these ratios on a monthly basis, you should be able to stay on top of any financial problems before they become critical and force you to use a merchant cash advance vendor.

What’s the moral of this sad story?

Get help before your financial situation makes you desperate. Merchant cash advance lenders prey on the hopes of small business owners who are having financial difficulty. We have written several posts that can help us find the right financing for you: “How to Take the Pain Out of Getting a Loan”, “Securing a Loan: Top Tips for Small Business”, “Small Business Lending is Booming”, “Best Small Business Loans & How to Qualify for Them”, and “How to Avoid Looking Stupid When Talking to Banks”.

There are plenty of sources for help.  We cover them in our post “How to Learn about Business for Free,” and we can help you with much more than just that.