COVID hurt Small Businesses badly because of 3 critical makes made by the US in its response to the pandemic. But, yes, there still can be a happy ending. 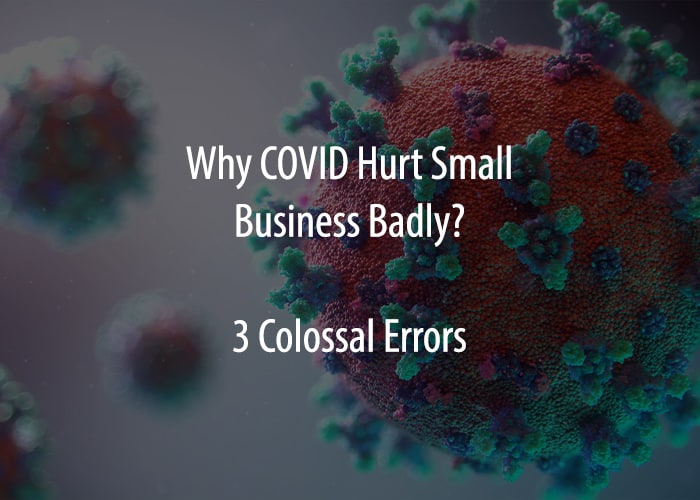 By now, we have seen the numbers on infections and death rates. I think most people will agree that how we as a country have not handled this well. What we have not really discussed is COVID’s harm to small businesses.

At first, COVID was considered a New York & Northeast problem. Now, it is being treated as a sunbelt issue. However, neither is true. The decisions that Congress, the Administration, and We, the people, made under the assumptions made during March through May have had direct consequences for small businesses now and beyond.

Did you know that not every state issued mandatory shutdowns to their population? Seven states—Arkansas, Iowa, Nebraska, North Dakota, South Dakota, Utah, and Wyoming—did not issue orders directing residents to stay at home. However, all but South Dakota closed some small businesses.

COVID hurt to small business would be short-term.

On March 27th, the CARES act was passed. The fateful assumption at the time was this was going to be a temporary disruption. The Payment Protection Program was originally for $349 billion, with an 8-week usage window. The Paycheck Protection Program and Healthcare Enhancement Act added $320 billion and extended the usage window to December 31st. Most firms with at most 500 employees were eligible for the Paycheck Protection Program funds. There are exceptions for some firms, which allowed each location of a business to be considered. This loophole was mainly responsible for the initially botched roll-out.

The Small Business Administration’s Economic Injury Disaster Loans (EIDL) was also provided at a low interest rate and had a term of up to 30 years. EIDL was supposed to reduce the hurt to small business by covering expenses. It was not to replace lost revenue or lost profits. Capped at $25,000 for an unsecured loan: secured loans were capped at $2 Million, it was meant to limit the COVID’s hurt to small business for the short-term. While these numbers made sense to cover expenses in the short term, no one anticipated the COVID’s impact would last for four to six months.

Unemployment soared to around 20% in the first month.  The CARES Act provided Federal Pandemic Unemployment Compensation (FPUC), an additional $600 per week for those receiving unemployment benefits, in addition to the state amount. It also provided an additional thirteen weeks of benefits.

These funds were credited with keeping the economy afloat from March through June and lessened the hurt to small businesses, who were open However, they ended in July, which will likely hinder  consumer spending and could extend COVID’s hurt to small business just when some are starting to reopen.

Where to begin with the Paycheck Protection Program… In this section, let us talk about the intent of the program.

The Paycheck Protection Program was intended to reduce COVID’s hurt to small businesses. Since small businesses employ about ½ of the US workforce and have minimal options for outside capital, cash is always tight. Small businesses are central to the economy; with a badly hurt small business community, the road to recovery will be longer and more difficult. The bill intended to help businesses weather the storm so that they could be able to ramp up quickly once the hurt of COVID passed.

As we now know, things did not work out as planned..

While we were too slow to react at the start, we weren’t the only country. There were plenty of other nations that got caught flat-footed. What is markedly different is what happened after the initial phase. It just takes a glance at these graphs to see the divergence.

I would argue that misinformation (plus the lack of first-hand experience to contradict that misinformation) likely leads to the divergent behaviors we exhibited & experienced, and the hurt that caused small business. It’s hard for those who saw the impact first hard to understand how the misinformation could have been believed. In contrast, it’s equally had for those who trusted those sources to disbelieve them when their personal experiences supported them. This polarization has nasty unintended consequences.

Recently released data gave credence to the initial suspicions that the Paycheck Protection Program funds did not land in the hands of those for which it was intended for a wide range of sources.

Since there was no need to demonstrate harm, the distributions of the funds did not match the delivery of the need. As this scientific analysis from researchers at MIT points out…

“First, we do not find evidence that funds flowed to areas more adversely affected by the economic effects of the pandemic, ...If anything, funds flowed to areas less hard hit. We do not find evidence that the PPP [Paycheck Protection Program] had a substantial effect on local economic outcomes during the first round of the program. Firms appear to use first round funds to build up savings and meet loan and other commitments”

We did a much less rigorous review than MIT and found very similar results. We explored the $/capita per state, divided by the number of days between the shutdown date to the date of first-reopening. Paycheck Protection Program didn’t get to the small businesses hurt worst by COVID.

Note that South Dakota is not shown as they had zero days of shutdown and received $1,552/person because of a division-by-zero issue.

Several studies have shown that states which opened before May 15th without a state mandate for mask use, have seen a significant uptick in cases. This graph illustrates the impact in some of the largest states, including NYC because it was an epicenter.

The study “Evidence from A Natural Experiment of State Mandates in the US”  by Wei Lyu and George Wehby in Health Affairs that reports “Mandating face mask use in public is associated with a decline in the daily COVID-19 growth rate”.

Treating COVID as if it pasted has hurt small business more

As much as we all would like for COVID to be done, it is not.  It’s clear we’re not dealing with “embers”, nor are “99% of cases are harmless” , nor is COVID just going to “disappear”. This rhetoric isn’t helpful because it delays acting.

As we’ve entered a new normal, it’s more complicated. The chart above support why action is necessary. The rash of small business re-closures in the hardest-hit states of Texas, Florida, Georgia, and others, and the delays in reopening in NYC, New Jersey, and other locations only prolongs the pain which small businesses are facing.

Some small businesses in New York City have been without a revenue stream for nearly four months. No small business can survive this hurt for much longer. Nor can we assume that the hurt to small businesses felt elsewhere isn’t going to hit us. As Davide Scigliuzzo, Josh Saul, Shannon D. Harrington, and Demetrios Pogkas point out in their Bloomberg article, “Covid-19 Is Bankrupting American Companies at a Relentless Pace”

The vast bulk, though, are small and medium-sized businesses scattered across the country…” Our economy is intertwined. What hurts one region impacts the rest.

The hurt to small business will continue without leadership

The good news is that Congress extended the Paycheck Protection Program to August 8th. If you are a small business and you’re eligible, you probably should apply.

However, this isn’t much consolation for those who took the Paycheck Protection Program in the early phases of COVID’s reign and remain shuttered. There is no indication that a plan to extend it to cover more than its original eight weeks of coverage.

Re-shuttered small businesses in California, Texas, Arizona, and Florida and extended delays in reopening small businesses in NYC and New Jersey will be facing some tough choices in the upcoming weeks. Bills geared to help extend or enhance these small business programs are stalled in Congress and have little support from the administration.

As Bloomberg points out, “[c]onsumer spending is at 40% pre-pandemic levels. 60% of small businesses say they need spending to return to normal by the end of the year to stay open”. While unemployment has rebounded somewhat, most economists don’t expect the trend to continue given the resurgence of cases in June and July.

As this drags on, some of the job losses are becoming permanent. It’s estimated that 1 million jobs have been lost in New York City. Job loss will only depress spending as things recover. In addition, the Federal Pandemic Unemployment Compensation expires on July 25th. If this program is not renewed, we can expect to expect continued depression in consumer spending. The prospect already spooks consumers.

Is There Any Hope for a Happy Ending?

Yes, but we must act fast and decisively. I still believe that Americans are fundamentally good people who believe in their country and care about each other.

These are polarized times, but we all need to see this situation as a common problem instead of a regional one. The “Us vs. Them” mentality is a losing strategy. COVID doesn’t care if you are a Republican or Democrat, live in a blue state or red, believe in the science, or believe in the news. COVID can infect us all the same. The longer we take to accept this, the more COVID will hurt small businesses, and the recovery will be slower.

COVID is a national problem – we need to treat it as such.

Megan McArdle says this beautifully in her opinion piece titled “Blue and red states should stop shaming each other on their COVID-19 response. We’re in this together.” This thinking must stop if we are to end the hurt to small businesses. New York small businesses were hurt badly in March.  Small businesses in Florida, Texas, Arizona, and elsewhere face this same hurt, now. One business’ pain isn’t more painful than another.

We need consumers to spend. But if buyers are fearful for their economic and personal safety, they will save. These public health guidelines aren’t personal freedom issues; they are fundamentally economic. I agree with Dr. Fauci when he says that focusing on public health is the way to sustained economic recovery.

It’s not an either/or situation. Megan McArdle sums it up nicely in her opinion piece “Three steps to consider for a more pre-pandemic normal” “Every war begins with people thinking it will all be over in a few months, and the war on COVID-19 has been no exception. At present, we’re in the midst of the inevitable psychological shift as everyone realizes that no, things can’t go back to normal anytime soon.”

We Can End COVID's Harm to Small Businesses, If…

Based on all the research we have done for this post, I believe that we can turn this narrative around if we, as small businesses, try to do these three things